To raise a glass, and a fork, to Julia Child for her 100th birthday, which was on August 15, 2012, I set out to make a beautiful gratineéd dish. Julia always seemed so delighted at the prospect of pretty much anything gratineéd.  She also always had a slight reverential pause when she said it, and a breathy drawn out delivery that seemed to say “Ta da!”

As defined in Mastering the Art of French Cooking

Gratiné – “To brown the top of a sauced dish, usually under a hot broiler. A sprinkling of bread crumbs or grated cheese, and dots of butter, help to form a light brown covering (gratin) over the sauce.”

Yum, right? Well, Julia thought so too, as she gratineéd everything from green beans (Haricot Verts Gratinés, à la Mornay) to brains (Gratin de Cervelles). One of my favorite video moments of her is from a 1987 appearance with David Letterman where equipment failure necessitates quick-witted improvisation and charm — two skills that Julia has in heaps. If all else fails, get some cheese and your trusty blowtorch (always on hand) and call it “gratineé!”

Julia: “Well this is a very nice kind of recipe! It’s very good!”…

Letterman: “But this is the kind of thing that would start riots in prisons!”

Letterman’s face while chewing on that raw hamburger is just priceless. Julia had a rule of not apologizing for the food she made, and suggested others follow the same rule.

“Maybe the cat has fallen into the stew, or the lettuce has frozen, or the cake has collapsed— eh bien, tant pis! Usually one’s cooking is better than one thinks it is. And if the food is truly vile, … then the cook must simply grit her teeth and bear it with a smile— and learn from her mistakes.” [1]

I planned to make Mussels on the Half Shell, Gratineéd (Moules  à la Provençale). But, after visiting two different markets — one Asian and one American — looking for live mussels, I was still empty-handed. I’m sure frozen mussels would work fine, but it didn’t seem fitting for the occasion. I had already purchased the other ingredients and it was getting close to dinnertime, so I decided to improvise and do a gratiné of shrimp instead. Well, shrimp is more like scallops than mussels, but there was no recipe in Mastering for this, so I decided to change gears slightly and follow the procedure for Scallops Gratineéd with Wine, Garlic and Herbs (Coquilles St. Jacques à la Provençale).

We don’t often drink white wine in my house, so I love single serve bottles of white wine to use for cooking. Because the wine is cooked with other ingredients, it is not the best way to enjoy the nuances of a fine or expensive bottle. Sutter Home Chardonnay, which comes in a 4-pack of 187ml (about 6 ounces) bottles, gives a very nice flavor without breaking the bank, or causing work or worry using up the rest of a 700ml bottle. 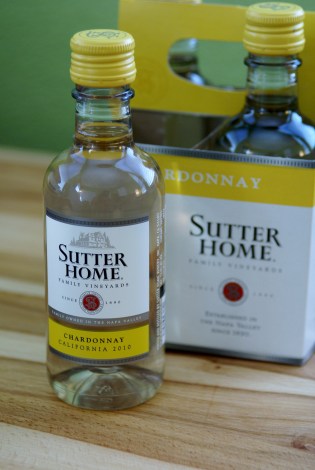 Julia’s recipe called for scallops to be cut into 1/4 inch thick slices, so I prepared the shrimp by slicing them in half lengthwise along the back. It made for a much more appetizing presentation than slicing crosswise into chunks, I’d say, and the shrimp also curled into attractive juicy pink spirals when cooked. Julia’s original recipe was developed to serve 6, but mine has been scaled down to serve 2.

The recipe is very simple and also quick to make, but has an arresting heady, aromatic fragrance and wonderful rich flavors. The moist firm flesh of the shrimp is complemented by the herbs and meltaway onions, shallots, and garlic, with nutty savory notes from the toasted gruyère.  The finishing touch of fresh parsley and lemon add brightness and freshness to the bold flavors, though they aren’t included in Julia’s recipe. The sauce is excellent sopped up with crusty french bread!

Go to the recipe for Shrimp Gratineéd with Wine, Garlic, and Herbs.