Ever since I first heard about the Eat Real Festival, I knew I had to attend. It’s been less than two years since Baelson and I moved to San Jose from Seattle, and only the first summer here we actually count (we got married in August of last year, which effectively ate that summer). We are still discovering the great local events and starting our own traditions down here. I have to say that the Eat Real Festival in Jack London Square is one of the coolest festivals I’ve ever attended and we’ll definitely be back next year.

What really stood out to me about this event was that it went beyond offering tons of local, sustainably sourced food and drink (“eat it”), which itself is an impressive feat. Demonstrations and exhibitions brought us closer to the food and showed us how to “make it” and “grow it” ourselves, too. I get so much pleasure and satisfaction out of my own DIY endeavors, from making jam to baking bread to infusing vodka. The sheer fact that you made something with your own hands lends a beauty that can’t be stripped away even if the results are perfectly imperfect. I love that this event helped its guests explore a “DIY lifestyle.”

Baelson and I went to the festival on Saturday with our friends visiting from Seattle. We all brought our appetites. When we strolled into Jack London square from Broadway Street just in time for a late lunch, the scene was rather unassuming — we couldn’t see any food stalls or crowds … yet. 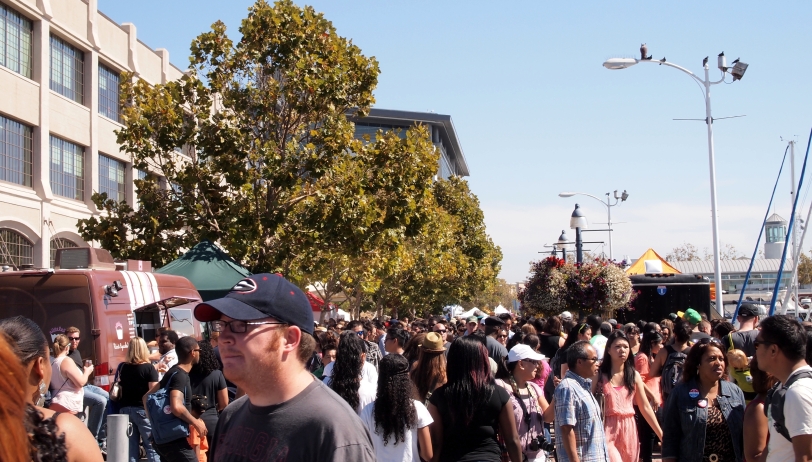 Just outside the swarm

As we reached Franklin St, BAM! We were faced with a thick swarm of people and could barely see an opening to squeeze our way into the corridor of food stalls. Politely wedging ourselves in, we instantly lost our stroller-toting friends in the crowd, and the place was so jam-packed that the cell towers must have been overloaded — attempts at making calls were thwarted by “system busy.”

Over 100 stands and trucks sold food , drink, and goods to the surprisingly massive crowd packed into Jack London Square. Prices were capped at $5, which probably made everyone even more delirious than the sights and smells of all that food. 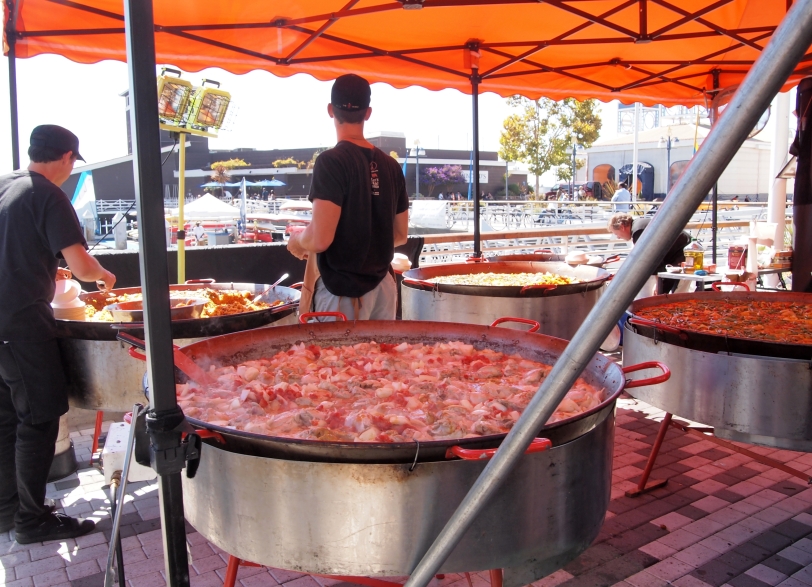 The longest line (extending outside the festival boundaries!) was arguably at Gerard’s Paella, where they were skillfully cooking up four seriously massive pans of paella chock full of fresh meats, seafood, veggies, and rice, bubbling away in a rich saffron-infused brew.

The paella looked and smelled amazing, but the lines did not suit our growling bellies, so we pressed onward.

Enticed by the exhibition of watching these guys carve meat from some gorgeous roasted lamb legs, Bael’s feet became firmly planted in the long line for The Whole Beast. 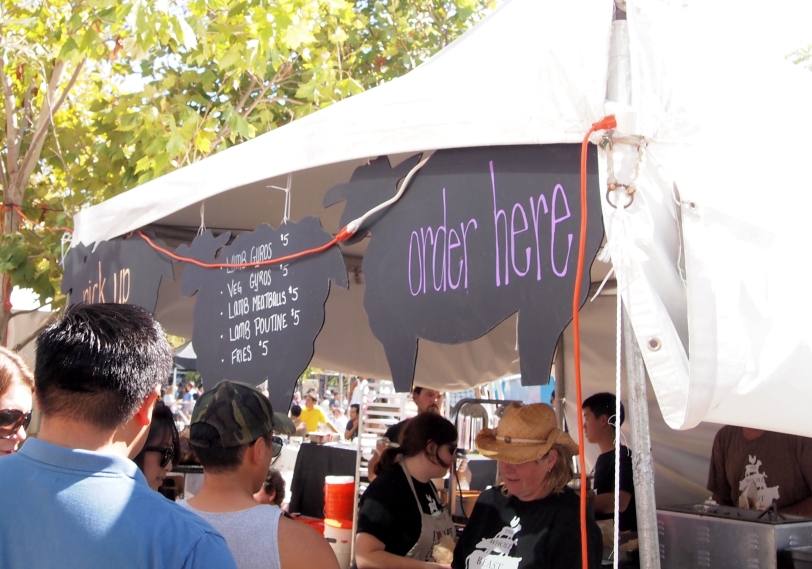 My rumbling tummy pulled me to explore further while the line crawled forward. I was intrigued by a sandwich from 4505 Meats that was called “Fat Bastard.” It was basically was a buttery toasted English muffin stuffed with everything but the kitchen sink. It was so many ingredients that they had to diagram the sandwich and bracket the fillings with the caption “Yes, this is all on one sandwich.”

Something about that long list of fillings called to my very empty stomach.

When we finally had our spread in hand, we found a spot on a nearby grassy hill and got to munching.

Bael got carried away and had ordered two lamb gyros and an order of lamb meatballs, on top of the monster sandwich I had for us to share.  The lamb was moist and nicely spiced, and I enjoyed the tender pita wrapper. Besides that it needed salt, I liked it. The veggies, however, confused me. I was expecting crisp cool cucumber or maybe even a nice pickle to cut through the fatty meat, but those slices tasted more like cooked, unseasoned zucchini. The meatballs were sad — dry, tasteless, and barely lukewarm, and in an equally tasteless yogurt sauce.

“Fat Bastard” was perhaps the perfect (to someone else) bar food — greasy, meaty, drippy, and downright unwieldy, it was kind of like a mini big bang of flavors in your mouth. I don’t mind messy food if it’s worth it, but with so many bold flavors and textures — pickled jalapeños, honey mustard ranch, pork & beer sausage, sauerkraut, chicharrones (and more!) — it was just too much.  I was hoping to taste some delicious homemade sausage in the thin patty, as this was, after all, from a specialty meat shop. The spicy jalapeños and sour funk from the sauerkraut overshadowed everything else, and the chicharrones got soggy and tasted stale. The English muffin did shine in spite of the over-accessorization. It was light, crisp, buttery, and delicious.

After fueling up, we had energy and more patience for squeezing through the crowds and checked out some more stands.

The girls from Rice Paper Scissors, who I met last year while volunteering at events with Forage SF, were there in full force. They were working the crowd, drawing people in to come try their food. Our friends tried their daikon cake, and said “I don’t know exactly what that cake thing was, but it was AWESOME!” Work it, ladies.

Deeper into the festival, we also found the Forage SF stall, and, reasoning that we had a teenie bit of room in our stomachs to pack in some little fishies, ordered up the crispy fried smelt with caper aioli. 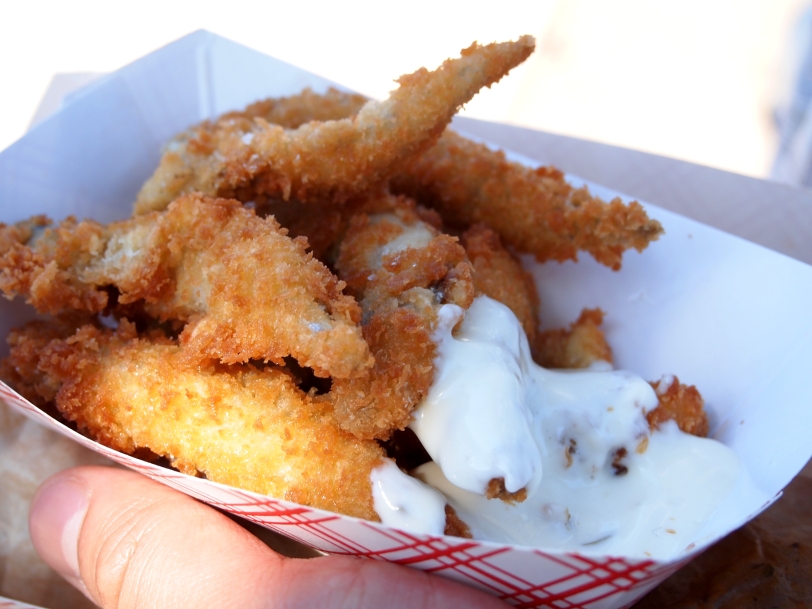 The tender, mild flavored fish had a light and crisp exterior and went nicely with the mellow aioli. They were excellent. My one little nit about this dish was that there were barely any capers in the aioli. More of their briny flavor would have been welcome.

We washed the fishies down with refreshing watermelon basil and pineapple mint agua frescas from the Hella Vegan‘s stand next door. 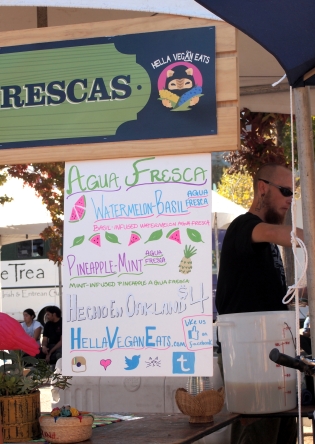 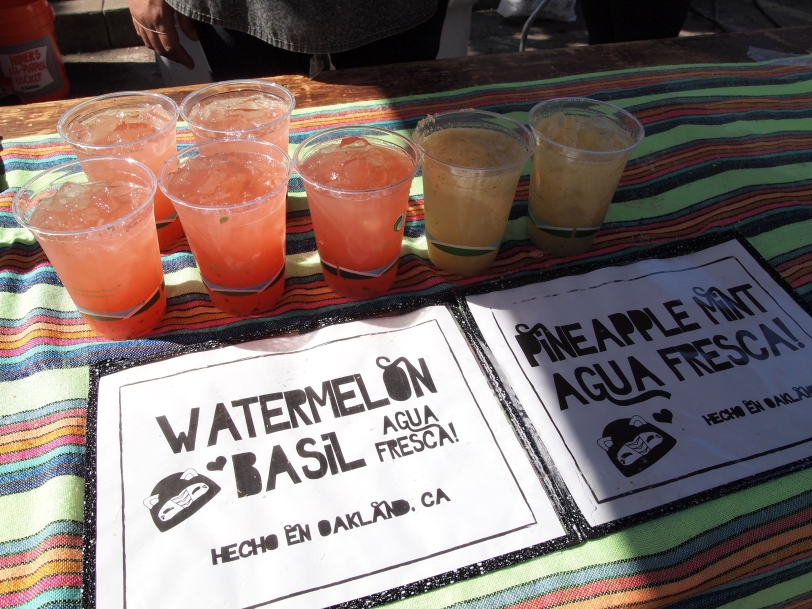 5 different venues hosted an impressive number and variety of events that went on throughout the 3 day event — everything from music performances, educational talks, how-to demonstrations, and meet-and-greets. The absolute highlight for me was the Flying Knives butchery competition where, right before our eyes, 3 teams competed at butchering the hindquarter of a steer into a set of retail cuts you might find in a butcher’s case. The competitors were, from left to right, “Team Young Bloods”, “the Yedra Family” (3 time reigning champs), and “Team Gristle.”

3 hindquarters hung, 3 teams at the ready to start cutting

Eat Real Fest founder, Anya Fernald, was host/commentator of the competition. She gave some great funny and informative commentary throughout the competition pointing out the different butchery styles and strategies of the teams (e.g. division of labor, and how much fat is left on the cuts), ways butchers can add value to meat (e.g. minimizing waste and maximizing saleable product), various cuts of meat and how they would be prepared (e.g. tougher cuts benefit from low and slow cooking methods, versus more tender cuts lend themselves to hotter quicker cooking), and touching on different methods of raising beef.

Why you tie a roast (so it cooks evenly)

Talking about the “liquid gold” (bone marrow), encased within the cow’s femur bone 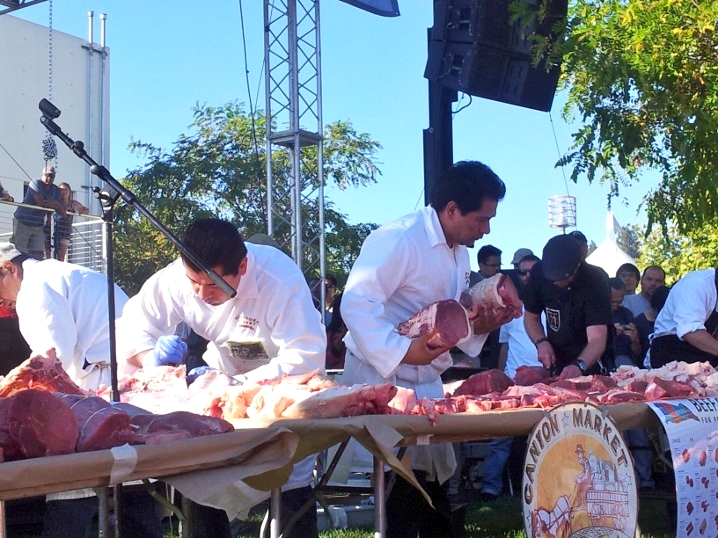 The Yedra Family assembling their cuts to present to the judges

It was amazing to see the skill and speed of the butchers at work, and just to visualize the physical work of breaking a huge chunk of cow into convenient steaks and roasts. 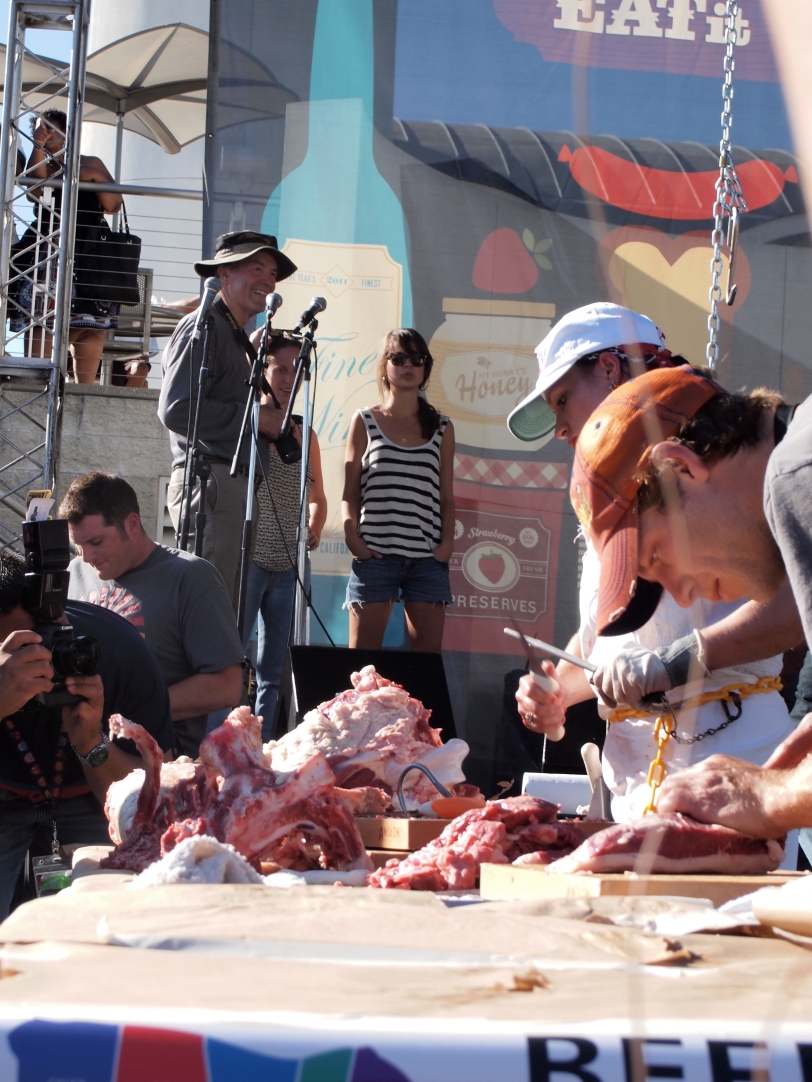 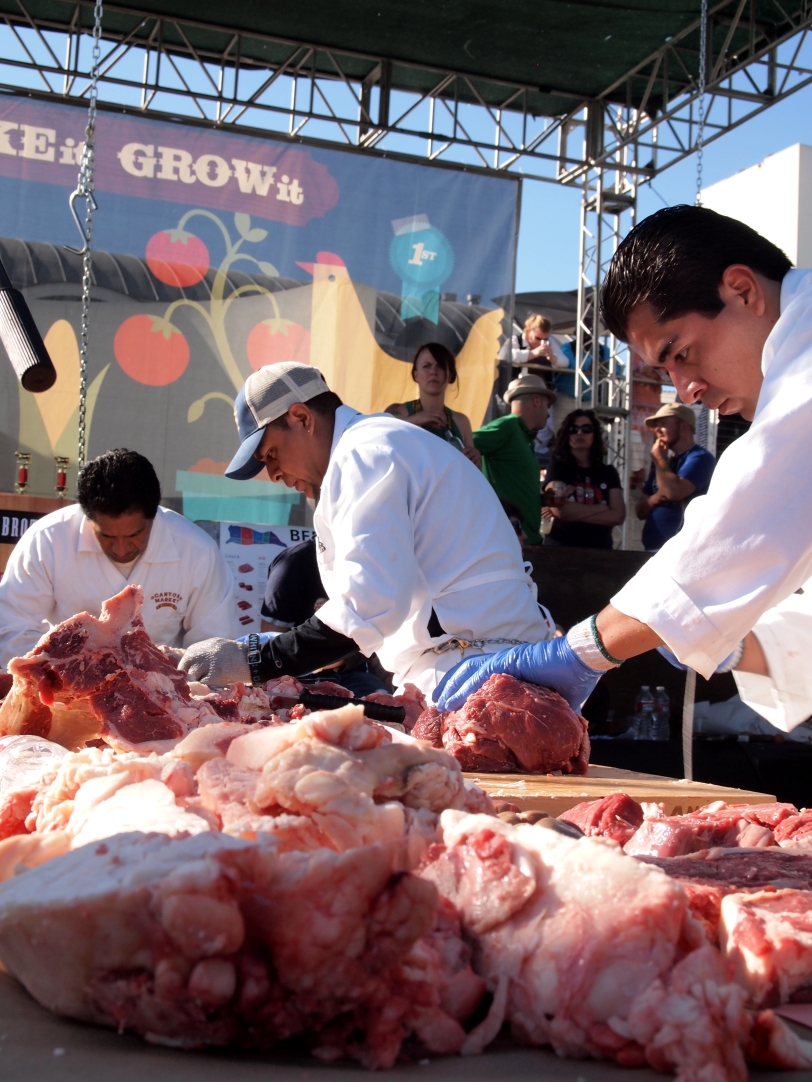 The Yedra family really stood out in all of these regards. It seemed as if they could have butchered that meat just as beautifully if they had been blindfolded… and possibly asleep. In fact, they finished so early and with such finesse, that they had time to garnish their display with kale leaves and place signs to identify their cuts. After that, they just drank beer and waited for the other teams to finish.

Here are the butchery displays presented to the judges by the three teams. 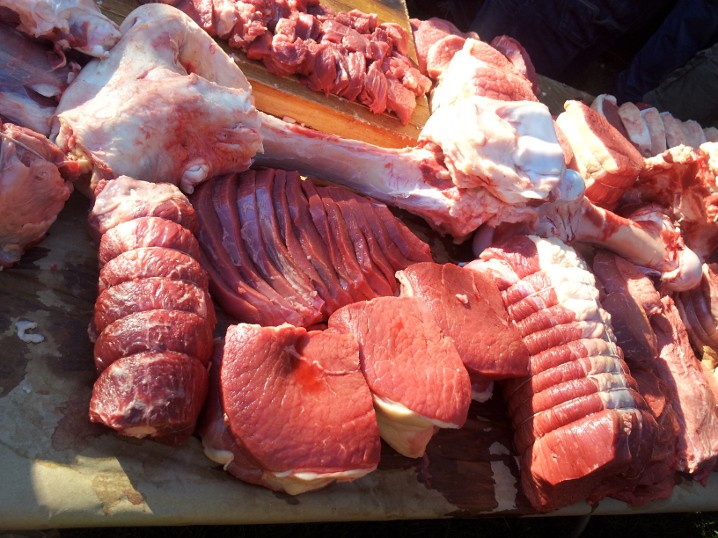 Polished presentation showcasing American and Mexican cuts from the Yedra Family.
Check out that Tomahawk steak! 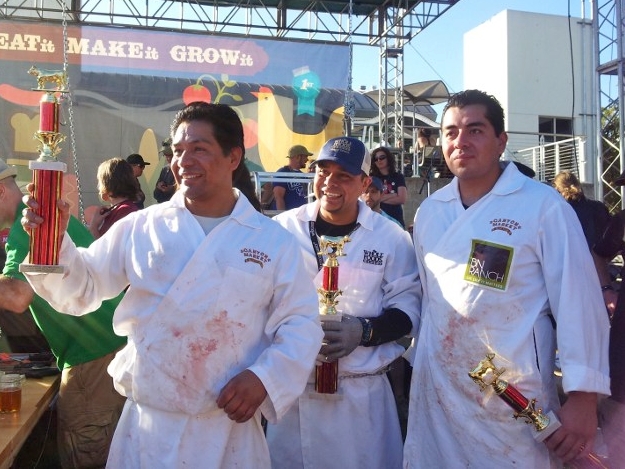 Fourth time Flying Knives Butchery Competition Winners! The Yedra Family will end their reign and participate as judges next year.

I have never gotten such a close-up look at how the cuts we buy at the store are skillfully broken down from sections of the whole animal. I was totally enthralled! I really enjoyed the focus that was placed on how we can utilize every part of the animal to provide food to the public, make money for the butcher, and minimize waste from animals that are raised and killed to feed us. I may not be the least geeky person (or the least squeamish one) about these things, but I think it’s important to open our eyes to how the food we eat gets to the table. Only good things and better choices can come from that.

With so many delicious eats, cool demonstrations, and friendly happy people (lots and lots of them), it’s safe to say we will be making the Eat Real Festival our new tradition. We didn’t have time or tummy space to eat and see everything (like the DIY chicken coops demonstration!), so there will be more to explore and look forward to next year for us. If you did not make it out to the festival this year, I encourage you to check it out next year. Hope to see you there!

What was your favorite part of Eat Real Fest?
What was the best thing you ate?