Continued from Hot headed: A twist on homemade sriracha sauce.

Go to the recipe for Fresh Chile Garlic Sauce

Could these be the elusive red jalapeños I’d been searching so long for? They looked almost like jalapeño peppers, but more cone-like in shape with thinner flesh than the green jalapeños I knew. Hmmm. 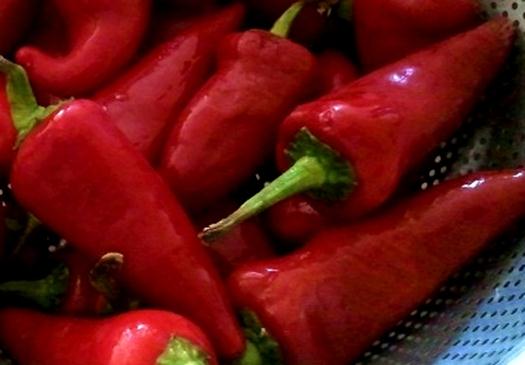 Turns out that I had red fresno chiles, which are similar in size and heat to jalapeños. They tasted bright and fresh, with a nice heat… close to what I imagined, but no cigar. The fresnos just didn’t have quite the depth and texture I was after. I wanted fat red chile flavor and I had a feeling red jalapeños were it.

I wondered if perhaps red jalapeños were simply not sold to the public. Red jalapeños are just green jalapenos that are fully vine-ripened and mature. Did Huy Fong Foods have some exclusive deal diverting every last one of the red guys to their plant in Rosemead, CA? I mean, if they can supply the entire world with their beloved sriracha sauce made from red jalapeños, why couldn’t I find even a measly handful here in the bay area? If anyone would know, it would be our local farmers.

On my next visit to the Evergreen farmers market, I stopped at each stall displaying chiles of any kind, and asked if they had red jalapeños. I was so excited and encouraged to hear that the answer was “not yet“. My peppers were still sitting green on the vines! The chiles on the farms were just beginning to turn red, and at one of the stands I was told the farmers often keep the red ones for themselves because most customers are looking for green. I was assured that in about 2-3 weeks the red jalapeños would be showing up at the market. Man, did that put a bounce in my step!

Just one week later, at the San Pedro farmers market, I stopped in my tracks. Years of searching, and suddenly, there they were. Nestled amongst the colorful spread of vegetables at the Veggielution Community Farm stand were the first precious few red jalapeño chile peppers! Feeling an odd fear that some wayward bandit could rush in at any moment and snatch them, I wasted no time asking the friendly staff about the chiles. They were interested in what I planned to use them for and genuinely wanted to help. Pulling out a box of jalapeños that were not on display, one of the staff picked out the few more red ones for me. I bought everything they had. I also bought some green jalapeños to see how they would fare. Since red jalapeños were proving hard to come by, it would be useful to know if green jalapeños made a good substitute. The guys wished me well on my hot sauce quest, and off I went.

I consulted several recipes for sriracha as well as hot sauce. Typical ingredients include fresh chiles, vinegar, and salt. Ratios of the various ingredient amounts relative to chiles vary quite a bit, and recipes for sriracha call for notably higher amounts of garlic and sugar. Taking a page from the sriracha recipe developed by Randy Clemens, I pulsed chilies, fresh garlic, salt, and white sugar to a coarse puree in the food processor. The eye-popping crimson color and the smell of fresh chiles and garlic made me giddy. It looked good enough to eat right then and there. 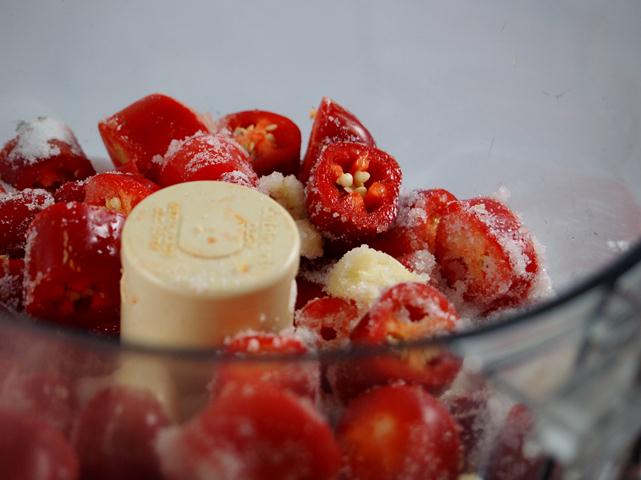 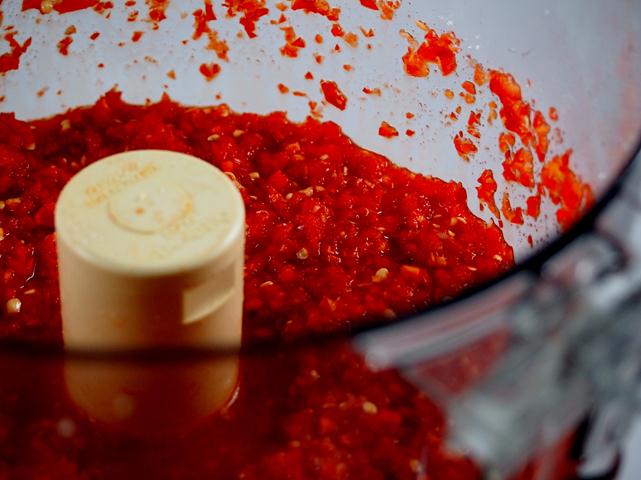 The mixture was transferred to a glass jar. As it sat in a dark corner on my kitchen counter, it was just about torture to see that delicious bright red sauce begging to be devoured.

It was supposed to stay out for several days to ferment, but, grabbing a big spoon, I reasoned that a good stir would be beneficial. When I removed the lid, a sweet, savory, spicy aroma leapt out of the jar. I gave the mixture a few turns, then succumbed. Scooping a couple of tablespoons out, I marveled at the sight of crushed chiles and bits of garlic napped in the glassy red-tinged liquor. Juicy bits of red flesh popped in my mouth. The flavor was earthy, savory, and fresh, with a slight sweetness. But it begged for one thing — acid. When I added vinegar, the flavors erupted into song. This crushed chile and garlic sauce was so tantalizing that I couldn’t bear to process it further. I am certainly a lover of the funky flavors from fermentation, but this was truly something special. 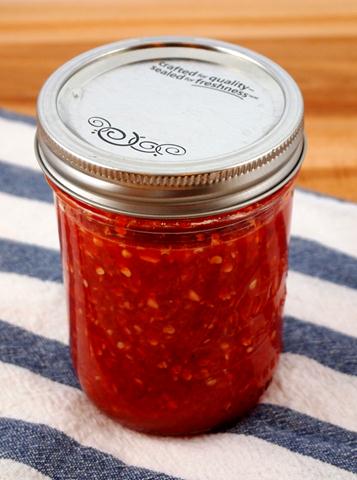 Finishing the rest of the crushed chile mixture with vinegar, it stood proudly in its coarse-textured raw glory.

The freshness of the juicy chile flavor and slight bite of garlic is unlike any store-bought chile garlic sauce I’ve tasted. What is most striking about this sauce, though, is the remarkable balance of flavors (sriracha-inspired) that allow it to stand on its own — my fresh chile garlic sauce can be slurped up literally by the spoonful (provided you can stand the heat!).

Go to the recipe for Sriracha-inspired Fresh Chile Garlic Sauce

I’ve come up with seemingly endless ways to use this sauce to jazz up all kinds of foods. Check out my recipes for Creamy Chile Garlic Sauce and Chile Garlic Grilled Cheese Sandwiches.

How would you use sriracha-inspired fresh chile garlic sauce?